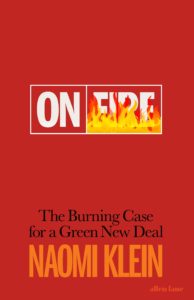 The world is ‘on fire’ but so are the striking students and activists worldwide trying to save it, argues Naomi Klein in her new book On Fire – The Burning Case for a Green New Deal. Bringing together an assortment of essays, articles and speeches written over the span of a decade, the book chronicles the author’s own attempts to grapple with why, in the face of the climate and environmental crises, “so many of us aren’t acting like our house is on fire when it so clearly is.”

Beginning with an account of the Deepwater Horizon disaster, Klein recounts the bewildering mix of arrogance and complacency which characterised the approach of the BP oil executives throughout the course of the disaster. The reassurances that their technological mastery would first prevent and then limit the damage of what became the largest ever oil spill recorded in US waters, stemmed from a mistaken and arrogant belief that we have a “complete understanding and command over nature”.

But as Klein describes, there is no simple explanation as to why, despite full awareness of the science for many years, governments around the world have allowed the continuation of business as usual in the face of the growing climate crisis and environmental breakdown. The barriers range from the ideological to the stories we tell ourselves, including the idea that humans have not only mastered nature but that some have a right to dominate it, often over others. Klein highlights the significant role that the process of othering has played in the continuation of business as usual. Despite mounting evidence of the detrimental impacts of extractive economic activity on vulnerable, indigenous and minority communities around the world, othering has allowed the “the powerful to discount the lives of the less powerful” over and over again.

The barrier to which Klein returns throughout, and that brings us to our present moment and the arguments for the Green New Deal, is the failure to recognise that climate change and environmental breakdown are inextricably linked with our extractive economic system and the accompanying injustices that it promotes whether they be economic, social, racial, gender or other.

Klein argues that climate change deniers on the free market right recognised this quicker than many environmentalists and weaponised it accordingly. Faced with the knowledge that to radically reduce global greenhouse emissions as the science demands would involve an economic and social transformation that would upend their free-market belief system, many on the right (particularly in the US) either retreated into outright denialism or began to equate action on climate change as a communist plot or as a destroyer of jobs and livelihoods.

However, Klein reasons – rightly – that arguing for an economic and social transformation, far from being a weakness which will drag down the climate movement as some have argued, is in fact a strength that will lift it up. The failure to build coalitions across different interests helps to explain the inability of environmentalists to secure more robust action from governments in the past. Moreover, if you’re undertaking an economic and social transformation to address climate change and environmental breakdown, why wouldn’t you do it in a way that also tackles inequality, low-pay and historical injustices? Likewise, without a transition that is economically and socially just, support for action on climate change will soon crumble if changes exacerbate existing economic and social inequalities as the ‘gilets jaunes’ protests in France demonstrate. Here lies the fundamental argument of the book, that only a comprehensive policy response, in the form of a Green New Deal, sweeping in its “scale, ambition and urgency” can help overcome the divides that our economic system has created and secure the “collective purpose” that has until now been lacking.

Reading the book will not leave the reader entirely without pessimism. It reinforces just how long many of these issues have been known but unacted upon and it also illustrates the continuing purchase of what should, by now, be defunct arguments. Episodes like Deepwater Horizon should surely have undercut the persuasiveness of the idea that solutions that rely on human’s mastery of nature can save us. But as Klein highlights extreme ideas such as “dimming the sky” (a process of spraying sulphur dioxide into the stratosphere to cool the planet), remain alarmingly common. The belief in a technological equivalent of a ‘Hail Mary pass’ to avert disaster lives on, though they are arguments which Klein dismantles with alacrity.

Ultimately, Klein’s book is one of hope. While identifying that we are at moment of peril, Klein also contends that this is a moment of huge promise. From the Sunrise Movement in the US and the student climate strikers in the UK to the ongoing defiance of Indigenous communities around the world protecting their way of life, Klein argues that a “new vision of what humanity can be is emerging”, and more than that, it’s being demanded – in the form of a Green New Deal.

As Klein says, “the time for a new story, and a new economic model, is now”.

Luke Murphy is Head of the Environmental Justice Commission and Associate Director for the Energy, Climate, Housing and Infrastructure Team at IPPR.