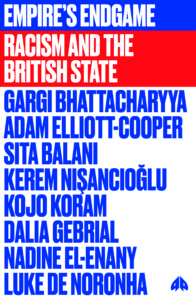 Britain is not a happy place, write the authors of Empire’s Endgame, and who could disagree? Bringing together eight of the UK’s top anti-racist scholars, Endgame marks a collaborative project where we read a collective voice rather than any one individual, with authors highlighting the interrelationship between race, class and gender, and state power.

The narrative begins with Britain’s imperial decline at the mid-point of the 20th century, which has left us with a nostalgic simulacrum of national history that the British left cannot seem to escape. The exemplar here is the welfare state, which in popular consciousness stands as Labour’s key achievement. Endgame accepts part of this narrative – but rightfully points out the racially-exclusionary logic of the welfare state.

The authors here point to the Windrush scandal as a good case in point, where immigration laws beginning in the 1960s right through to the hostile environment of today have stripped New Commonwealth (non-white) citizens, particularly Black people from the Caribbean, of their citizenship and rights of access to the welfare state. As Endgame points out, the British left’s response to this scandal saw Windrush victims as good migrants being denied their rightful access to the fruits of the nation, vis-à-vis other ‘deviant’ migrants who apparently have no claims on the state. Yet this response refused to acknowledge how the nation and its forms of welfare have, and continue to be, materially reproduced through an imperial hinterlands beyond the British mainland. The British left, Endgame argues, hung up on its so-called glorious past, thus failed to question the welfare system itself and the ‘exclusionary and expulsive’ logic of Britain’s immigration regime that masks its imperialism.

Against this backdrop of state racism, the authors mark out their own version of anti-racism. Giving short shrift to ideas such as putting brown and black faces in high places, Uber-endorsed celebrations of Olive Morris, diversity training and self-help manuals for white people, Endgame seeks to recover the intrinsic link between anti-racism, anti-imperialism and anti-capitalism.

Taking inspiration from UK Black Lives Matter (BLM) protests in 2020, the book centres the abolitionist framework of rejecting a longing for state authority, whether social democratic or neoliberal, and pushes us to examine the horizon of an anti-racist socialist future beyond the state. Abolishing prisons, the police and capitalism here are conjoined with building new institutions, practices and ways of living that liberate us all.

Empire’s Endgame rightfully rearticulates an anti-capitalist anti-racism that demands anti-imperialist solidarity with the Global South. But this itself is complicated even in an age of online ubiquity. The clarity of the great movements for decolonisation and anti-imperialism  were assassinated by imperialists in the 1980s. As a result, the voice and agency of the Global South, which partly inspired and inflected British anti-racism, has also been muffled. Indeed, Endgame touches on this point, highlighting how Palestine remains a lone touchstone for anti-racist internationalism. But this is now the task for British anti-racism, to reconnect what appear disparate struggles – such as the rights of farmers in India, indigenous peoples in the Amazon, and survivors of Grenfell – around an anti-racist political project. Part of that project must be the recentring of voices from the Global South. And to the list which includes borders, police and prisons we must add ideas of abolishing the World Trade Organization, International Monetary Fund, World Bank, and the TRIPS Agreement that, as we have seen, value some lives as more worthy of protection than others.

Endgame also contributes to the debate about anti-racist and radical activism after the failure of Corbynism as an electoral project. For many, Keir Starmer’s leadership of the Labour party marks a return to centrist politics and the end of the party as a political vehicle for radical change. But this limits radical politics to the machinations of the Labour party and misunderstands how Corbynism arose in the first place. Corbynism, argues Endgame, was partly given life by the ‘reawakening’ of street politics at the beginning of the 21st century, from protests against the Iraq war through to Occupy and anti-austerity activism, and their varying constituencies of community organisations, activists, trade unionists and first-time political actors. Even though Corbynism failed as an electoral project, and rejected elements of its own formative radicalism (for example on immigration and policing), Empire’s Endgame rightfully points out that the issues of income inequality, precarity, housing and climate change that animated Corbynism are not going to disappear. Here the book places its hope in a reinvigorated antiracism, street politics and the networks of care that have emerged within communities during the Covid-19 pandemic, to push forward abolition politics.

It may be tempting to read Endgame’s understanding of ‘politics moving beyond formal institutional practices and out into the spaces of everyday life’ as a retreat from formal (party) politics altogether, into a politics of community activism. But this would be a mistake, as the authors clearly leave room for the politics of the street to enter the state, even if the hope is for the state’s eventual abolition. But the wider question Empire’s Endgame asks us to consider centres on what becomes of the politics of everyday space that has found expression in the street. Can this form of politics allow us to build alternative institutions? Could organisations such as BLM and networks of care established during Covid-19 be scaled across communities to offer an alternative form of political education or even forms of social care or health care? And how can these alternative spaces become key to the endgame of the British state and abolitionist internationalism? Endgame certainly does not answer all these questions, but undoubtedly raises them for us to debate, discuss and work out together. The book beautifully reminds us of what we on the left so often forget: power is in the people and politics we address.

John Narayan is a lecturer in European and International Studies at King's College London.