Labour’s failure in this election was yet another reminder of the rapidly changing nature of its electoral coalition. It performed well in big cities and in strong remain areas but fell back in towns and strongly working class areas across the North. These trends have been evident for
some time.

The Fabian Society report For the Many? (2018) demonstrated that big cities had overtaken the most working-class seats as Labour’s heartlands and warned Labour must reverse its falling support amongst those communities if it wanted to win power. The graph below shows the changes in Labour’s core support since 2005. It presents seven clusters of seats where Labour performs well and shows how much better Labour performs in those seats compared to its average vote share in England and Wales.

The most striking finding is that Labour’s support in the 63 most working-class seats in the country has fallen significantly to just 11 points above Labour’s average vote share across England and Wales. This is a dramatic worsening of a trend which has been evident for decades. Labour’s overperformance in all other clusters of strong Labour seats has continued to rise. Remarkably, this also includes the seats with the most professionals, which were five points more likely to vote Labour than the national average. For more details on the seat clusters and for more information on Labour’s changing electoral coalition see For the Many? 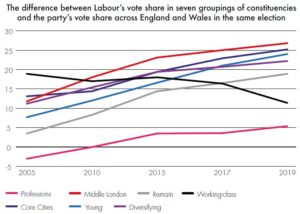 Olivia Bailey is deputy general secretary of the Fabian Society.

Scottish Labour has suffered punishing electoral defeats before but this feels worse; there is so much at stake. Scotland is divided not just by opinions on Brexit but also by independence. The conundrum that Scotland now faces is that the harder the Brexit, the more likely independence becomes; yet the harder the Brexit, then the harder the border between England and Scotland and the more economically damaging independence could be. What is clear from the general election result is that there is a majority for remaining in the EU; it is less clear that there is a majority for independence. Labour’s position on the EU was, for many Scottish voters, reached too late and too reluctantly to chime with them. Jeremy Corbyn’s leadership was undoubtedly the main reason for the dreadful electoral showing last Thursday but fixing that will not fix Scottish Labour.

Labour has long argued that Scotland can have the best of both – control in Scotland of most public services but an integrated UK-wide market. With Brexit (and probably a hard one) now all but inevitable and a further referendum on independence likely, Scottish Labour needs to consider what its offer now is. For those struggling to put food on the table tonight, a promise to oust Boris Johnson in five years’ time will offer little comfort. They may well conclude that the risks of independence are now worth taking, weighed in the balance against at least five years of Tory rule.

Had Labour won the election, it might have been possible to stop Brexit and radically reform the UK’s constitution to modernise it and to distribute power beyond London. Had that happened, calls for Scottish independence could have been assuaged. The election has changed the game; Scottish Labour will need to change too.

Catriona Munro is the chair of Scottish Fabians

On a night when national headwinds and questions of leadership were too overwhelming, in Bury North we were within an inch of holding on. We lost by just 105 votes and 0.2 per cent, bucking the national trend on performance and becoming the most marginal seat in the country. It’s a seat that felt desperately ready to stay Labour despite being a marginally higher leave seat than the country’s 2016 referendum result.
As it turned out, only 53 people needed to vote Labour instead of Tory and we’d have won.

At eight in every 10 doors voters raised with us their problem with our leadership. Brexit featured far fewer times (two out of 10). We found even those ready to vote for Labour, or for me personally, would then ask that we promise the leader wouldn’t stay on or become prime minister. The die was cast on Jeremy Corbyn for too many. A dropdown menu of reasons was cited back to us: neutral on Brexit, dithering on decisions, the failure to manage the abhorrent antisemitism in our midst, bullied MPs, poor on security, inadequate response to the Skripal incident, a nuanced position on imprisoned convicted terrorists serving their full term just a day after the latest London attack whilst we fought a general election campaign. Campaigners’ efforts felt undermined by refusals to apologise on TV or for the snap announcement to be neutral on Brexit. Each day a new broom was needed to sweep up the mess left overnight when confronted with voters’ latest concerns.

The manifesto was described as spoilt, a Christmas list with too much on it. It shouldn’t come as a surprise that voters in towns struggling to make ends meet won’t be impressed by tall promises of generous hand-outs and free stuff. Whilst well intentioned, these felt reckless not compassionate to those I spoke to. If you haven’t got enough to go around you know all too well how much things out of your reach cost and you’re sceptical about the word ‘free’ because there’s always a catch. Campaigners spoke of being snow-blinded by the promises we were making and the suspicion that the WASPI pledge was made on the hoof after being overlooked by the manifesto.

The risk with these summaries is they can be misread as personal opinion and not personal experience. My view though is that we’ve felt this was coming for too long and continued to hurl ourselves and free stuff at the ‘red wall’ in the hope of getting its
attention. I have pledged to listen further still and I will ensure that this experience of the most marginal seat in England features prominently in the reflections to come for the party I love and still wish to represent in parliament. For those that still want me I have said, hold on and remain faithful, as I will.

Lastly, my challenge to all leadership candidates; you should not expect to become leader of our blessed party without passing the marginal seat test. Patently, our leaders and policies are not forged in the white heat of a marginal seat. Yet this is what frames our electoral system and is the only gateway back to winning in the country. So I am inviting every leader and deputy leader candidate to Bury North to take a walkabout with me, do a public meeting and answer the concerns of everyday life in Britain, away from the protective, sound-proof majorities that so many of those confident in our victory before now, have returned to.

James Frith was the Labour MP for Bury North