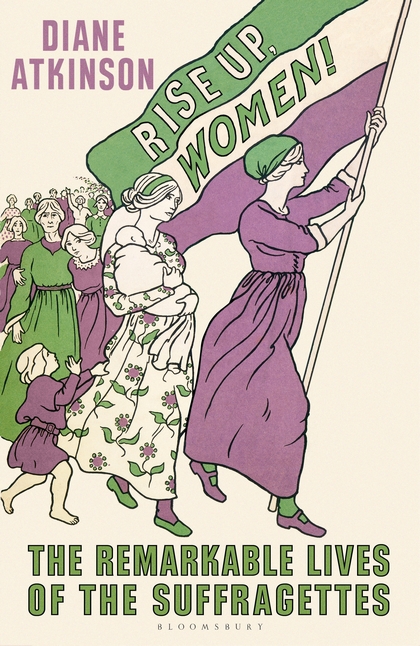 It is an interesting – and pertinent – time to be reading a book that has been hailed as the definitive history of the suffragette movement. Diane Atkinson’s Rise Up, Women! joins many other texts currently adorning booksellers’ displays: some new, some old, but all sporting the purple, white and green garb of the suffragette movement as we mark the centenary of the first women winning the right to vote. Yet Atkinson sets her book apart by focusing not only on the ringleaders of the movements, important though they were. In fact, it is her determination to display the social breadth of the movement to win the vote that makes this book the important – and unsurprisingly weighty – volume that it is.

In some modern feminist circles, the glorification of the suffragettes is regarded as slightly passé. While we push forward conversations around inclusivity and diversity within feminism, the problems with the suffragette movement have overshadowed their achievements. The suffragette story we are told usually excludes women of colour and working-class women and the suffragettes themselves are often characterised by their most famous leaders, notably the wealthy Pankhurst family.

Atkinson’s book, then, feels like an almost direct retaliation to this top-heavy version of suffragette history, describing a movement that is far more sprawling. For the reader, this makes the book feel more like a collection of short stories and gathered anecdotes than a cohesive narrative. But for the feminist, it is this slightly frustrating structure that makes it feel so relatable.

Modern-day feminism has many different forms. Fierce disagreements amongst fellow feminists are not only commonplace but to be expected, as the movement swells to encompass people from all backgrounds. This is why the seemingly cohesive structure of the suffragette movement had never felt applicable to me. But Rise Up, Women! chronicles those women on the edges, the women doing their own work, making the struggle their own. From running soup kitchens to organising protests to writing en masse to local representatives, Atkinson paints a picture of a movement that is messy and uncoordinated and occasionally contradictory – but full of passion. She also manages to capture the courage of these suffragettes on the margins; women who faced not only brutal state action, but also the loss of friends and family because of their dedication to equal rights. This retaliation against equality has morphed over time, but it still exists. Indeed, it is bittersweet that the centenary of the suffragettes comes at a time where there is a social and political backlash against feminism, from far-right populists preaching ‘traditional values’, to the surge of men’s right activists, emboldened by the anonymity of the internet. If nothing else, it is the courage of those who strike out for the good of all women that links us across 100 years, and across multiple struggles.

It would be remiss to talk about this bravery without mentioning the brutality of the state. From direct police orders to sexually assault suffragette protestors, to the inhumane treatment of the women who were imprisoned, the violence inflicted on women by the institutions there to protect them was breathtaking. At the time, they were seen as terrorists by some in government, and treated as such. Rise Up, Women! does not shy away from this, and gives a more detailed and gruesome chronology of the state’s actions against women than I had realised was the case. One hundred years on, it is now cuts to the state that hurt women, as opposed to the state itself. Government discrimination against women is less obvious but no less pernicious today: cutting funding for domestic violence refuges and police capacity, not to mention the heavily documented burden that welfare cuts place on women.

Contemporary groups such as Sisters Uncut continue to practice direct action, from regular protesting outside Downing Street to storming the red carpet at the BAFTAS. At a time when Theresa May plays lip service to feminism, a thorough reading of the violence against the suffragettes is an important reminder that equality has always been fought for, never given freely. The legacy of the suffragettes has been celebrated across Westminster and beyond, and although we should celebrate the parliamentary progress this represents, we should not allow this struggle to be institutionalised. To do so would be to ignore the inequality these institutions continue to perpetuate.

Rise Up, Women! is a book which is huge and flawed – much like the movement it seeks to chronicle. And yet it is also the book I would recommend to anyone seeking to gain not only a truer understanding of the suffragette movement, but inspiration and courage in pursuing gender equality battles today.

Rise Up, Women! The Remarkable Lives of the Suffragettes by Diane Atkinson, Bloomsbury, £30

Megan Corton Scott works on women’s rights policy for a Labour MEP and is a member of the Fabian Women’s Network national executive.