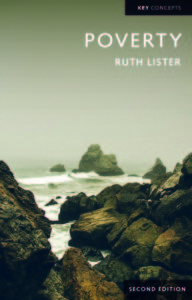 Before Covid-19, 14.5 million people in the UK were caught up in poverty, with both child and in-work poverty dramatically on the rise. Poverty was rising fastest for families with the youngest children, and disproportionately affected Black, Asian and minority ethnic households and households with a disabled individual. Covid-19 has made things significantly worse: millions of people have experienced sharply worsened financial circumstances with many plunged into poverty due to job losses and earnings reductions.

While referencing coronavirus sparingly, Poverty provides a clarifying and informative discussion on the meaning and experiences of poverty which is especially relevant during the Covid-19 crisis. Ruth Lister presents some powerful contributions of people with lived experience on what poverty means: it is “having all the same dreams for the future that everyone else has, but no way on earth to make them come true”, “saying no to my kids every day of their lives”, and “being treated like nothing, less than nothing, and accepting it.” In addition to focusing on the core material experience of poverty, Lister also highlights the importance of non-material aspects to people living in poverty, including powerlessness, stigmatisation, humiliation, isolation, and a lack of voice. Many of these are symbolic or relational, rooted in a lack of recognition of the agency, capabilities and human rights of people in poverty.

The debate over free school meals during Covid-19, and the effective campaigning by Marcus Rashford on food poverty, has brought to public attention the experiences of people living in poverty, perhaps more than at any other time. The growth of food banks over the past decade has created new sources of shame and stigmatisation for families in poverty, argues Lister. Covid-19 has made food insecurity, and a reliance on food banks, worse as both reflect wider insecurities and vulnerabilities.

Free school meals matters not only because educational attainment is dependent upon it, but also because how food is acquired and consumed influences people’s sense of worth and belonging. If food is an ‘expression’ of society, as Lister quotes, what does a free school meal package containing a third of an onion, half a tomato, and cheese packaged in money bags say to the families who receive them? This scandal, and the resistance the government has repeatedly displayed to providing financial support for buying food, has denied parents the security, control and freedom to make decisions over how to feed their children.

As the health emergency starts to come to an end, the economic challenge is likely to be with us for some time with increasing poverty and financial insecurity. There is a need for a positive discussion around what a good society without poverty looks like, argues Lister. By embedding a vision of the future that resonates with everyone, an anti-poverty agenda can be united with a wider agenda on promoting inclusive growth across communities, tackling intersecting inequalities of disability, gender, race, class and age, and providing for just transition on the climate.

In Poverty, Lister provides clear first principles of this agenda – one that has never been more needed. It argues that anti-poverty politics needs to combine redistribution with “respect&recognition”. By investing in financial, personal, social and cultural resources needed to ‘get by’ and ‘get out’ of poverty, policy should seek to expand the agency and security of people in poverty so they can flourish. Efforts to ‘build back better’ should seek to expand the resources people can rely on, and provide space for people living in poverty to be heard.

As part of the ‘respect&recognition’ approach, Lister also argues that dignity for recipients of social security is important. Indeed, the author cites favourably evidence that recipient dignity is crucial to the success of any anti-poverty strategy. Part this requires people with lived experience to be heard much more loudly and be given space to shape public debate away from the toxic narratives that shame and stigmatise. This is something Labour in opposition could enable as it creates, what Keir Starmer called, a ‘new contract’ with the country.

As we look towards the next election, Labour should also heed the principles articulated by Lister. The party cannot be in a position, as it was in the last election, where its manifesto lacks a bold and credible strategy on poverty, particularly child poverty. The former children’s commissioner, Anne Longfield, has criticised Labour, suggesting its 2019 manifesto would “have created the biggest increase in Government spending on record, but no reduction in child poverty”.

Drawing on Lister’s approach of a politics of poverty that combines redistribution, recognition and respect is a good starting place to ensure that the next Labour government delivers on its promise to make our country “the best place to grow up and grow old in”.

Ben is a senior researcher at the Fabian Society.