The first tract published by the Fabian Society after it was established in 1884 contained a rallying cry. “You who live dainty and pleasant lives, reflect that your ease and luxury are paid for by the misery and want of others,” a section of Why are the Many Poor? read. “Come out from your ease and superfluities and help us!”
In the 137 years since, many tens of thousands on the left have heeded that call. The founding members were driven by a desire to promote debate on the key issues of the day through lectures and pamphlets, and, ultimately of course to advance Fabian gradualism – ‘waiting patiently as Fabius did’ but when the time came ‘striking hard’, as that very first pamphlet put it.
Were the society’s founding members to come back today, they would surely find current members share some of the same motivation for involvement as they once did, our latest members’ survey suggests. “I like the opportunity to discuss and help shape left-wing policies, I like the excellent events and publications and like participating in my local society,” one respondent said when asked why they were a member. “I share its ideals of equity and fairness” and “I like the commitment to evidence-based argument” were two others.
Our members, more than 550 of whom took part in the survey, were asked to choose the three things they valued best about being a Fabian. Supporting the politics and values of the society was the top answer, cited by 58 per cent of respondents, closely followed by publications and the Fabian Review (55 per cent) and then supporting the society’s research and advocacy (41 per cent).
Some 77 per cent of members who responded felt that membership represented good value for money – although 16 per cent either agreed or tended to agree that the cost of membership excluded too many. As for our influence, 57 per cent agreed the society was effective at influencing political and public debate, while just over 70 per cent felt we had an influential relationship with the Labour leadership.
Members think the top priority of our work should be supporting Labour to win the next election, with the second most popular priority securing the adoption of Fabian policy proposals in the next Labour manifesto. These priorities will be reflected in our 2021–2024 strategy, which will be focused around four objectives: supporting Labour to win the next election; securing the adoption of policy proposals and perspectives in the Labour manifesto and Labour policy platforms; helping to build a strong, united and diverse Labour movement; and strengthening the capabilities, activism and reach of the society.
Politically, the society seems to be getting the balance right: 4 per cent think our programme is too left-wing and 13 per cent too right-wing compared with 83 per cent who believe it is about right. Unsurprisingly, perhaps, two-thirds of respondents voted for Keir Starmer in the last leadership election, with nearly 18 per cent backing Lisa Nandy and over 6 per cent Rebecca Long-Bailey. But it is clear the society continues to be a broad church: when asked to name the Labour figure who best represents their views, answers ranged from Tony Blair to Jeremy Corbyn, with Gordon Brown, Harold Wilson, Tony Crosland, Barbara Castle, Nye Bevan and Michael Foot all getting at least one namecheck alongside current Labour party figures such as Starmer, Nandy, Anneliese Dodds, Yvette Cooper and David Lammy.
The members’ survey is designed to inform our work and the society staff team are looking at responses to see how we can best meet members’ expectations. We know there is scope to do more to improve diversity and to ensure members can participate: 60 per cent of respondents would like to get more involved in the work of the society.
This past year has of course been marked by the Covid-19 pandemic and many members have welcomed the chance to attend events online which they might not have been able to attend in person in normal times because of their location. As one respondent put it: “Without losing the energy of in-person events such as the New Year conference, consider keeping virtual conferences as a way of having more people involved.” 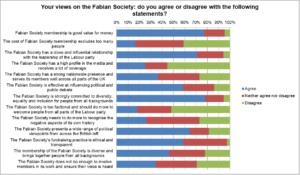