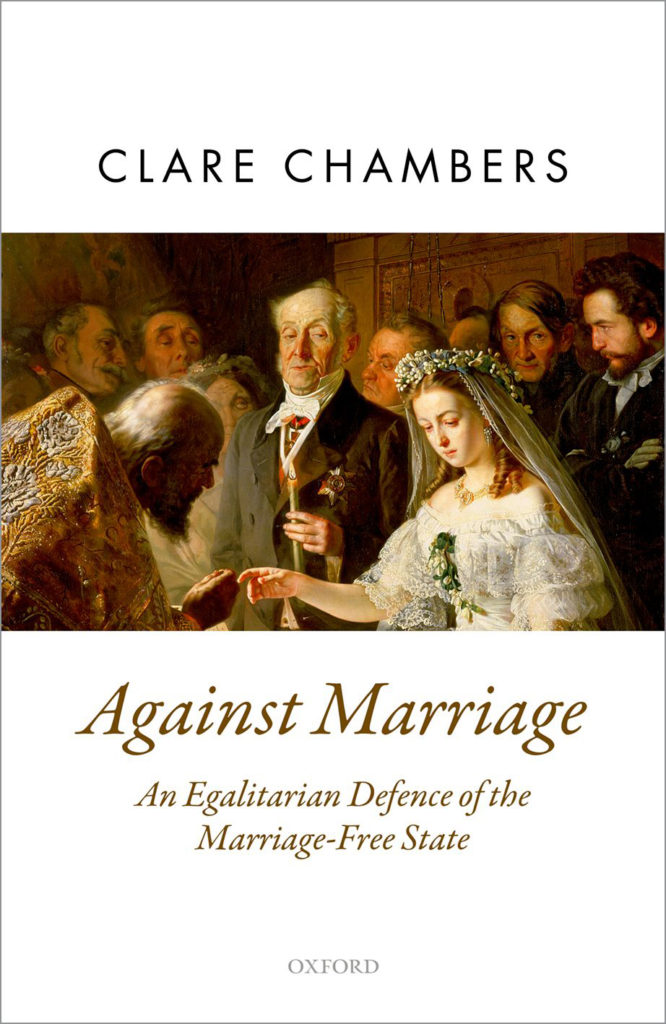 Marriage makes me uncomfortable, whether the reason is political, historical, cultural or aesthetic. No matter how many married couples I see living modern equal relationships, for me, the whole concept is tainted by its patriarchal past. But I say ‘for me’ with good reason, as I have dozens of friends and comrades who disagree. This is a fault-line issue that divides socialists and feminists amongst themselves.

In Against Marriage, Clare Chambers makes the case for why egalitarians and liberals should reject marriage. It is political philosophy at its most practical and readable. Historically, marriage has always enshrined inequality and male domination (it was only in 1991 that rape within marriage became a crime). Chambers argues that symbolically, marriage cannot escape these roots: “Its status as a tradition ties its current meaning to its past.” And she points out how modern attitudes and practices with respect to marriage remain highly gendered, with women more likely than men to place marriage at the heart of their life ambitions.

This inequality still plays out in the proposal, planning and celebration of most marriages: weddings are perhaps the most highly gendered rituals in which left-leaning people still engage. But Chambers shows how inequality within marriage runs much deeper. The share of domestic labour is far less equal among married than co-habiting couples, reinforcing economic inequality and gender stereotypes. More worrying still, long-term, coercive control of women by some men is associated with marriage.

This is the backdrop to current proposals for opposite-sex civil partnerships, an idea that has raced from the margins to the mainstream in a few short years. Today the Supreme Court hears the case of a woman and man who argue they have suffered discrimination because the law permits civil partnerships between same-sex but not opposite-sex couples. Already the Court of Appeal has accepted the couple’s argument that, as they cannot in good conscience marry, they are being treated unequally in a way that engages their human rights. The court only ruled in the government’s favour because ministers are planning to review the policy.

A Conservative, Tim Loughton, is leading the charge for opposite-sex civil partnerships. But in February his private member’s bill was gutted by the government and it now provides only for the promised review of policy. The outcome of this review is far from certain, as the government could scrap same-sex civil partnerships not extend them to all. Chambers points to numerous cases overseas where this has happened.

Ending civil partnership would deprive people who reject the symbolism of marriage the chance of a legally recognised relationship. But for the Conservatives proposing reform, an argument based on political belief is not attractive. They prefer a pragmatic case linked to the stability of relationships. Millions of opposite-sex couples already choose to live together and bring up children outside of marriage. The widespread use of civil partnerships would therefore bring greater stability to child-rearing and better legal protection for women when relationships end.

Protecting women in the event of separation is something left and right agree about, and the case for civil partnerships is being prosecuted by a curious alliance of anti-patriarchal egalitarians and pro-family conservatives. But for the left, is it enough to create an alternative to marriage while it still remains the default choice? Chambers argues not. She is prepared for marriage to continue as a private cultural practice, but says it should have no legal recognition; a liberal state should not promote an institution that advances a particular version of the good life, with inequality at its heart.

For Chambers, replacing marriage with civil partnership would be an improvement. But even this would still confer rights on couples only, to which others such as care-givers and lone parents might have good claim. This is an argument Peter Tatchell has made recently too. He suggests that any two adults should be able to form a commitment pact, which would involve them selecting from a menu of rights and responsibilities those that are right for them. Chambers also wants non-sexual relationships included within a legal framework and for the duties and obligations of marriage to be unbundled. But against Tatchell she says specific rights and duties should derive directly from the performance of the various functions of a relationship, rather than from legal agreement.

For now these ideas are on the fringes, but the debate on legal unions has moved very fast in 20 years. Immediately the priority is to legislate for opposite-sex civil partnerships. But the debate on how we regulate relationships is nowhere near its end.