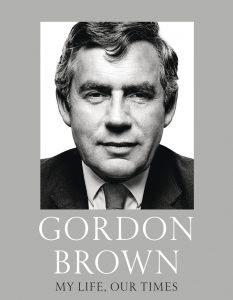 I started out in politics as an idealist with a strong, perhaps naïve, conviction of what needed to change in Britain.

Politics, I thought, was more than the art of the possible; it was about making the desirable possible.

Of course, there is always a tension between idealism and pragmatism. Over five decades I have learned that leaders need a command of substance, mastery of detail, problem-solving skills and an ability to see the big picture. But that is not enough: above all else, leaders need to communicate a positive vision of the future that can inspire and motivate people and mobilise their enthusiasm for progress and change.

I had long since read Barack Obama’s book, The Audacity of Hope, before he first came to London as the newly elected president of the United States in April 2009. I was aware that a painting entitled Hope by the British artist George Frederic Watts had inspired the theme of his book, and I was able to offer it to him as an official loan from the Government Art Collection. It shows a lone blindfolded girl sitting on a globe and trying to play a lyre whose strings are broken. That painting reflects something he had written about, and which I deeply believe – that even in the most hopeless of situations we can, and must, seek grounds for hope.

We often depict hope, or rather its death, in the most dramatic terms – a refugee boat capsized at sea or a food convoy unable to enter a besieged town. But hope can die in very ordinary, and seemingly unspectacular, ways as well: young people denied the opportunities their parents’ generation enjoyed and deciding there is nothing worth striving for; unemployed men and women feeling rejected and losing all sense of self-worth; older people alone, fearful, their health and mobility needs mounting and feeling no one seems to care. 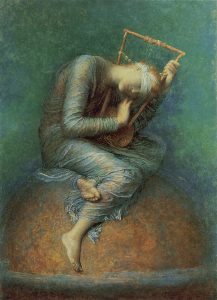 Progressive political parties exist to deliver a message of hope. For without a foundation built on hope, parties may survive without distinction in the short-term, but are destined to fail with time.

Perhaps it took me too long to understand fully another essential dimension of leadership: that any idea, big or small, is of little significance until it can be communicated compellingly and in clear terms. I had the privilege of meeting Anthony Burgess at the Edinburgh Festival in the early 1980s. His novel A Clockwork Orange was released to critical acclaim in the UK in 1962, and his publisher sold the rights to the US. Then the American publisher decided to release the novel without the twenty-first and final chapter, and it was this attenuated version of the text that became the basis for Stanley Kubrick’s 1971 film. From the moment he agreed to the US deal, Burgess anguished over the deletion of the final chapter. Chapters 1 to 20 told a tale of never-ending violence. But Chapter 21 was about redemption, about a young man who had gone to the rails suddenly finding, as he was about to become a father himself, that there was a better way to live.

To his lasting regret, Burgess’s vision of a more optimistic future never reached a wider audience.

In politics, you not only have to do what is right, but you have to convince the wider audience. In this book, I write of the greatest test that I faced as prime minister: the gravest financial crisis of our lifetime, and one which could have rapidly gone critical in the form of a sweeping global depression. That did not happen – and, through unprecedented co-operation worldwide in a plan for recovery, growth quickly returned, unemployment started to fall and people’s savings were secured.

But I wish that in the midst of all that I was doing to forestall a depression, I had been able to do more to lift confidence and to convey hope. And I regret to this day being unable to convince the British people that we had to finish the work of recovery by rebuilding our still unreformed and risk-laden financial system. That crisis and the response to it, in the form of the innovative G20 meeting in London in April 2009, are matters I deal with in detail.

Like most politicians, I cannot claim to have always seen the writing on the wall, good or bad. In my 13 years in government there were many turning points, some fundamental, others less important. In the chapters that follow I write about times when it was right to act – from making the Bank of England independent in our first days in government in 1997; introducing tax credits to address child and pensioner poverty in 1999; refinancing the NHS with the biggest single tax rise in our history in 2002; and ushering in the biggest peacetime fiscal stimulus in 2009. And I write about times when it was right to step back, as when in 2003 we rejected the euro and in 2007 decided to exit Iraq.

I also set out what I have learned about myself and the kind of challenges that will face anyone on assuming leadership in today’s world. The year 2007 may prove to have been the last year in which a Scot became prime minister of the United Kingdom; but I suspect that beyond that, in one respect at least, I may have been a politician out of season.

Politics is, in fact, surprisingly physical. A life in politics is one of thousands upon thousands of handshakes, one at a time, with eye contact often more important than words. I love campaigning. I love meeting people. I love not just the big rallies but the face-to-face encounters. I feel drawn to people – hearing their stories, listening to their ideas, putting myself in their shoes and learning from their comments and criticisms. I miss the local advice surgeries I held for constituents in ten different locations in towns and villages across my constituency.

I am not, I hope, remote, offhand or uncommunicative. But if I wasn’t an ideal fit for an age when the personal side of politics had come to the fore, I hope people will come to understand that this was not an aloofness or detachment or, I hope, insensitivity or a lack of emotional intelligence on my part, but an inner sense that what mattered was not what I said about myself but what our government could do for our country.

My purpose in politics was getting things done. I start, in the pages that follow, with a description of an ordinary day in the life of a prime minister in office, and a scene-setting account of the forces at work that necessitated, challenged and complicated the work that we did.

Where in my life and our times I made a difference, and where I fell short, is for the reader to decide…

Gordon Brown is the former Labour prime minister of the United Kingdom (2007-10).