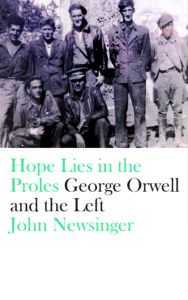 George Orwell – and more particularly his literary writings – continue to capture public attention and imagination. His enduring fame as arguably the British left’s most penetrating popular writer of the 20th century rests especially on his dystopian Nineteen Eighty-Four – as much, in my view, a reflection of his view of possible direction of British society as of totalitarianism per se – and his novella Animal Farm. Both of these works have contributed ideas and phrases to popular culture and Orwell belongs to the select few authors who can claim the honour of an eponymous adjective.

I cannot claim to be a particular fan of Orwell’s prose style, but I find the way his writings allow for multiple interpretations refreshing in a world of increasingly polarised and closed-off viewpoints. John Newsinger’s study of Orwell’s relationship with the British left is part of this tradition of critical interpretation, and a very welcome addition to the (fairly voluminous) body of writings on the man and his work. Newsinger avoids the obvious pitfall of accidently writing an ersatz biography (which is genuinely a greater risk than it sounds)) and instead focuses on Orwell’s ideas and his relationship with left-wing movements and, most particularly, the Labour party. The book is engaging throughout and Newsinger’s determined mission to redeem Orwell from the charge that he moved to the right in his later years is executed clearly. At the same time, this is no uncritical paean to a great figure – there is a clear critique of the less wonderful and sometimes deplorable side of Orwell’s character (especially his involvement with the anti-Communist Information Research Department to which he passed a list of those he believed to be Communists and ‘fellow travellers’, including details on personal matters such as sexuality).

The most fluent and passionate section of the book is Newsinger’s discussion of Orwell and the left in the 1930s. Here we learn about Orwell’s disenchantment with the Communist party in Britain, Comintern and the notion of a popular front. His experience in the Spanish Civil War, where he fought with the POUM against Franco’s forces, led Orwell to see Comintern’s member parties as having no genuine interest in a workers’ revolution since their primary concern had become the advancement of the Soviet Union’s foreign policy. For Newsinger this experience ensured that anti-totalitarianism would be central to Orwell’s intellectual outlook and project for the rest of his life. His dissatisfaction with the concept of a popular front, moreover, was a rejection of the idea that the interests of the workers and capitalists could be aligned in the fight against fascism without causing enduring harm to the workers’ interests. For Orwell, such an ‘alliance of enemies’ would eventually lead to ‘fixing the capitalist-class more firmly in the saddle’. By the outbreak of the second world war, then, Orwell had become a member of the disaffiliated Independent Labour Party but still distrusted the mainstream labour movement.

It is Newsinger’s discussion of Orwell’s embrace of Labour that is of most interest to me (since the party is always on my mind – I cannot sleep a wink without reading a chapter of the rule book with a glass of milk). Previous scholars, most notably Bernard Crick, have tended to herald Orwell’s move to Tribune as literary editor to be a pivotal moment at which he came to his senses and recognised Labour as the only practical way forward. Newsinger, by contrast, is keen to depict Orwell’s reluctance to go along with Labour’s reformism and his ongoing commitment to radical socialist ideas. Although he now thought that Labour offered the best possible option in the foreseeable future, he remained sceptical about its long-term potential to secure meaningful change. After the 1945 election swept Labour to power, Orwell was even willing to set aside his critique that it was not socialist enough since the greatest challenge was national survival in a world of economic uncertainty. Newsinger acknowledges this as a temporary shift to the right in Orwell’s politics, but I do not find his argument that the late 1940s witnessed another shift back to the left to be fully borne out. Indeed, this view hinges very much on the interpretation one takes of Nineteen Eighty-Four and Newsinger uses a very straightforward interpretation of Orwell’s pref-ace to make his case. Authorial intention is never easy to apprehend, and the debate is unlikely to be settled soon.

Overall, Newsinger’s book is a fascinating and vivid account that warrants attention. His concluding chapter rather wonderfully captures the ongoing use of Orwell in political debate and considers his continued relevance. I’d happily recommend the work to anyone interested in the man himself, his work, or the left in the inter-war and immediate post-war years. I don’t agree fully with Newsinger’s interpretation – but that’s the fun of discussing Orwell.

Jason Brock is a former senior researcher at the Fabian Society and is currently Labour leader of Reading Borough Council.