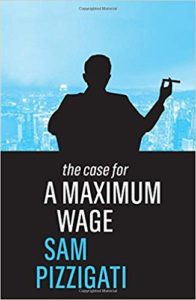 Discussions of inequality, and of the pressures that emerge in highly polarised societies, have risen to the fore of political debate in the last decade, and rightly so. Executive pay has been allowed to sky-rocket, while median wages have regressed, and traditional sources of tax revenue appear to be dwindling as vast fortunes flow offshore. Some of the wealthiest among us have tactfully avoided any serious reprisals after the 2008 financial crisis, and have in fact seen their fortunes expand, while an ever-larger segment of society finds their wages barely cover their expenses.

As far as remedies go then, simply taxing wealth and incomes that have accumulated greatly at the top has failed to treat the symptoms of inequality, never mind find a cure. Instead, what seems to be so desperately needed is a mechanism that could prevent huge pay gaps from opening up in the first place.

His premise is remarkably simple: Well-functioning societies place limits on a wide range of different behaviours and phenomena that, if not adequately managed, threaten our collective well-being. From speed limits to CO2 emissions to the additives allowed in food products, we find it sensible and necessary to curtail excesses that arise where they stand to cause harm. Should we think of a maximum wage any differently? No, Pizzigati argues, because disparities in wealth and income “endanger well-being just as profoundly as speeding motorists”. And he’s right: malaise experienced in unequal societies is harmful.

At this point, egalitarian-minded readers will be nodding their heads, and indeed will do so for much of this book. But Pizzigati is persuasive enough throughout to at least make the concept palatable to those that may otherwise squirm at increasing the redistributive powers of the state.

Pizzigati refuses to accept rising income inequality as par for the course and claims that implementing a maximum wage would disincentivise executives that seek to take home all the winnings without sharing at least some of that with the rest of their employees. This is almost the opposite of what is happening at present, with executive salaries and compensation packages at the corporate summit skyrocketing in recent years. Earlier this year we learnt that Amazon doubled its quarterly profits – meanwhile, its employees are forced to rely on food stamps. Twenty years ago, in the UK CEOs of the top 100 firms earned 45 times more than workers. We’re told that figure is now 130 times the average worker pay. While it is hard to say what constitutes ‘too much’, at some point in the discussion, the idea that growth in executive pay can be explained by comparable rises in performance becomes trivial.

But how might we implement a maximum wage, especially since raising the national minimum wage proved so controversial? Plus, for all of our ability to describe the problems of inequality, research too frequently comes up with solutions that keep the existing structure of inequality in place. This clearly burdens Pizzigatti, and as a result, the book goes to lengths to offer radical yet politically feasible solutions. Notable is his suggestion to privilege the private enterprises bidding for government contracts that make observable commitments to tackle pay differentials. Again, this is a flash of political pragmatism that could coax a wider ethos of equity out of a political establishment that, so far, appears out of ideas. However, more empirical research is still needed to determine what a maximum wage would resemble in practice and for all its insight, this is not that book.

What Pizzigatti does well, is help us realise why the current model for redistribution stalls, as well as dismantling myths regarding the benefits brought by the super-rich, and detailing methods for transitioning to a society that no longer grapples with accepting them as economically necessary. The concept of a maximum wage therefore successfully breathes new life into the inequality debate with highly contextualised illustrations of not only the problems that wage disparity creates, but most importantly a well thought out description of how we begin to resolve them.

Louis Morin holds a BA in politics and an MA in international relations. He has previously written on automation and inequality and worked for Nottingham City Council.