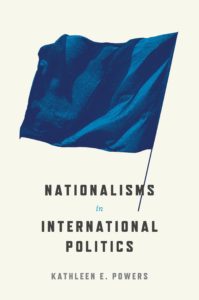 In 1940, George Orwell wrote that he would rather his patriotic, militaristic upbringing than “be like the left-wing intellectuals who are so ‘enlightened’ that they cannot understand the most ordinary emotions.” Orwell’s target was his contemporaries on the left, many of whom became pacifists in the wake of the first world war, and who associated national pride with militarism.

Does nationalism promote militarism? It depends, says Kathleen Powers in her new book. Powers describes how previous theories of nationalism have been hamstrung by an exclusive focus on the strength of nationalist identity, whilst neglecting what it means to be a nationalist.  Powers identifies two models, unity and equality, on which group identities such as nationalisms are built. Unity groups prioritise homogeneity, whereas equality groups prioritise reciprocity and fairness. Group members linked by unity are like family, whereas those linked by equality are like friends.

Several experiments prove that citizens’ beliefs are shaped by the content of certain nationalist identities. Powers finds that unity-based nationalism inflates threat perceptions and increases support for disproportional force, for instance – and this is the standard view of nationalism and militarism. Equality-based nationalism, however, mitigates militarism because group members commit to reciprocity and extend this norm to outsiders.

To illustrate the distinction between unity and equality-based nationalisms, Powers contrasts speeches by presidents Barack Obama and George W Bush. After the 2015 San Bernardino terrorist attack, Obama used equality-laden rhetoric to dampen public enthusiasm for retaliation, noting that the United States was founded on the idea that “you are equal in the eyes of God and equal in the eyes of the law.” Obama then asked Americans to extend these values and distinguish between terrorists and ordinary non-Americans. This contrasted with Bush’s September 11 address to the nation, which distinguished the ‘civilized’ from ‘evildoers’ and emphasised that the United States would “remain strong and united”.

Powers also argues that unity and equality group identities have distinct implications for intragroup cooperation. Heterogeneity undermines unity, because unity is difficult when group members deviate from expectations over what binds the group together. Using EU survey data, Powers finds that “equality drives support for European cooperation, unity does not”.

Powers also notes that there is little support amongst Quebecois for political independence, despite “resistance to unity within a pan-Canadian identity”, and that many “nevertheless retain strong trust in and support for Canadian institutions—in part because they believe that Canadian law treats them fairly.” Quebec offers hope for the survival of the United Kingdom’s political union and suggests that British politicians should stress fairness and equality over unity when discussing the relationship between England, Wales, Scotland, and Northern Ireland.

Most politicians describe themselves as patriotic, rather than nationalistic. Powers is sceptical of these claims, nothing that ‘[m]ost leaders likely endorse nationalism even if they reject the label’. This apparent disagreement is resolved upon reading that Powers defines nationalism as ‘a commitment to one’s nation and its superiority’. This unobjectionable definition is similar to Orwell on patriotism: “Devotion to a particular place and a particular way of life, which one believes to be the best in the world.”

The war in Ukraine and the government’s recently announced plan to send asylum seekers to Rwanda give us good reason to be wary of nationalism. However, national pride is a precondition for a political party. If encouraging such pride necessarily meant promoting prejudice against immigrants, weakening the union, and undermining international cooperation, Labour would face a choice between remaining permanently in opposition or winning a pyrrhic victory. Fortunately, as Powers and others have shown, this is not the choice we face.