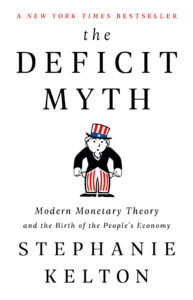 The Deficit Myth: Modern Monetary Theory and How to Build a Better Economy, Stephanie Kelton.

The message of this book is, at one level, very simple: A government with its own currency does not have to identify a source of money before it can spend. This is in contrast to local government, or a country such as Greece which is part of a single currency zone. Or to countries like Zimbabwe or Venezuela which have printed so much money that people have lost confidence in it. If there is for any reason a threat of inflation, then a government must be prepared to lower the pressure on prices by raising taxes or finding other ways to take spending power out of people’s pockets. However, if there is unemployment, then inflation is unlikely. The unplanned spending on coronavirus provide a perfect illustration; it has not led to inflation, which is well below the Bank of England’s target – at least for now.

Stephanie Kelton, who worked for Bernie Sanders, is the spokesperson for a group of economists who proclaim they can finance progressive policies without raising taxes or increasing borrowing. Such policies include universal health and social care, a guarantee of employment on socially useful programmes paid at a living wage, college fees for the less well off, better housing, and above all the green new deal – a re-engineering of our economies to address the climate crisis and to conserve and reuse resources.

But this is not the whole story. She ignores the fact that commercial banks create money when they lend more than has been deposited with them, as do the creators of cryptocurrencies. It is the combination of all the resulting expenditures that may cause inflation, which is more likely in an economy that is uncompetitive, when much of the extra spending creates jobs abroad. But inflation is a dangerous and fickle friend. It transfers resources from those who cannot protect themselves, especially anyone who depends on income fixed in terms of money, to those who can. It was the means by middle-class property owners paid for most of the costs of two world wars. But a sustained inflation, once started, may be very difficult to bring under control and to do so usually involves a large dose of austerity – exactly what Kelton hopes to avoid. It undermines confidence in the institutions of a country. It is particularly damaging in a currency that is widely used in world trade, such as the dollar or pound.

Kelton’s version of Keynesian economics is logically impeccable, and she provides plenty of evidence to demonstrate this. Governments can, and probably should, be much more willing to do what they believe is needed and work out how to pay for it subsequently, and it may well be fine to do much of this by creating new money. Periods of recession, when most economic actors are scared of spending, therefore give governments opportunities to implement a wide range of progressive policies and programmes. Many of the investments will pay for themselves over time, as Roosevelt discovered in the 1930s. Hitler and Mussolini used it to build autobahns – but it is also a means by which reactionary governments can engage in corruption and support oppressive or racist policies.

This book is a polemic, designed to destroy the conventional wisdom of liberal monetarist economics. But the risks of a sustained inflation are real, and the book downplays them to make its case. No one wins if inflation gets out of control. Caution is still called for before governments rush off and spend as if there is no tomorrow.

Andrew Coulson is a retired lecturer in the School of Government and Society at Birmingham University and former chair of Birmingham Fabian Society.