New Fabian Society’s research shows that as Labour enters 2022 the party has reason to feel upbeat but definitely not complacent. In a large poll conducted by YouGov before Christmas we asked 3,380 people whether they thought Labour or the Conservatives would handle key political issues best.

Labour was ahead on 17 of the 24 issues we asked about, including health, education, levelling-up and help for families and pensioners. The two parties were pretty much tied on crime, immigration and tax, issues where the Conservatives are usually stronger. Meanwhile more people preferred the Conservatives to Labour on Brexit, security and the economy (although when we asked who would be best for people’s own living standards Labour was ahead).

We’ve converted these results into a ‘heat map’ which shows where Labour is strong and weak – across both issues and demographic groups. They show Labour’s rated best on the different political issues among groups most likely to support the party – younger age groups, better educated, households with professional occupations. But even with a Conservative-leaning group like the over-65s, Labour is ahead or neck-and-neck on half the issues we asked about. And Scots also strongly prefer Labour to Conservatives, even though electoral support for the party is low. 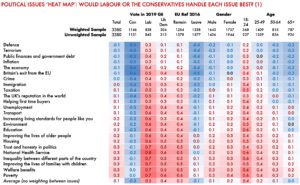 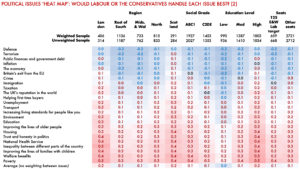 These results are fairly encouraging for Keir Starmer. But the news was more mixed when we asked people if they thought the party had been moving in the right direction or the wrong direction since he became leader. A huge 45 per cent said they weren’t sure, which shows the work Labour has to do to make a firmer impression on people’s minds. Those who expressed a view were pretty evenly divided between people who thought Labour was going in the right and the wrong direction. This is a measure the party needs to improve on.

The types of people most likely to say Labour was moving in the right direction include many of the groups that we know already lean towards the party – people who voted Remain, graduates and households with professional occupations. But there are signs of progress in more challenging demographic categories as well. People aged 65 and above were over-represented among those saying the party was moving in the right direction, and a quarter of those who voted Conservative in 2019 said this about Labour too.

All told, there are more than enough people considering voting Labour for the party to win the next election. Thirty five per cent of adults said the chance of them voting Labour at the next election was between 6 and 10 out of 10, while just 26 per cent said the same about the Conservatives. The job is to turn mid-term support in opinion polls into votes in a general election ballot box.

Fabian Society analysis indicates that around one third of this group of Labour ‘considerers’ did not vote for the party in 2019. This includes 13 per cent of 2019 Conservative voters, which is large enough number to decide the next election. And importantly, these voters are well located for the party. They are over-represented in the 125 marginal seats in England and Wales that Labour must win to form a majority, and especially seats Labour has not held since 2010 or before.

In fact, our poll suggests Labour is doing considerably better in marginal seats it has not held recently, compared to those it lost recently. This is an important corrective when comment about the ‘red wall’ gets over-heated. The group of seats Labour lost in 2019 are not the same as the ones its best placed to win when the next election comes.

Labour still has a huge amount to do, and the progress the party has made recently is more down to Tory weakness than Labour strength. But the tectonic plates beneath Britain’s political map are starting to move.