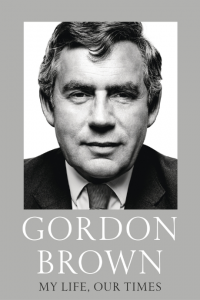 Gordon Brown’s autobiography, My Life, Our Times, gives a rare insight into his personal life, his own reflections on the challenges of being in government and of leadership, the successes of New Labour and the changing nature of politics. It is a refreshing read that gives the reader the opportunity to delve into the personality of the man behind the politician, while also gaining a deeper understanding of the decisions he made over his 40 years in public life.

While the post-2010 coalition government was quick to assign the blame of the financial crash to the Labour government and to instil a narrative that the Labour party could not be trusted on the economy, the Labour side sees more blame in the party’s failure to defend its own economic record. Certainly, Labour was slow to take credit for Brown’s quick actions in response to the global financial crisis.The Labour government was, he says,“the first to push for cooperation among all the leading economies: first to avert a Great Depression, and second, to deliver far-reaching reforms of the financial sector to prevent a future collapse.” However, as Brown notes: “We won the battle – to escape recession. But we lost the war – to build something better.” The damage to Labour’s credibility on the economy will take generations to recover and Brown is refreshingly honest about what went wrong.

By 2007 Brown had a decade of experience in government. It was this experience and skill that enabled him to steer the country through the worst financial crisis of our age and prevented what could have been a very different, and catastrophic, outcome. I remember the 2008 crash clearly as it coincided with the year I began university. The New Labour government’s emphasis on ‘education, education, education’ meant that more of our generation than ever before aspired towards a university education that would offer a career, financial stability and upward social mobility. And then the crash hit. That world of opportunity was becoming smaller as the economy shrunk, the cost of living rose and the gap between rich and poor widened. There is no doubt that we are still dealing with the fallout from the global recession, but without Brown’s swift response it could have been worse. If only this had been communicated better to the electorate.

The British are often considered reserved and reluctant to talk about our inner feelings, and yet, as Brown argues, it is this “sense of personal reserve [that] can limit the appeal and rapport of a leader” in British politics today. Brown’s view that his purpose in politics was ‘getting things done’ is something that resonates with many people who choose a life of public service. Many of us look at the problems that face our society and we turn to politics as the way in which we can bring about real change.

You cannot help but admire an individual who believed the priority was determining what “government could do for our country” through generating the policy ideas, gaining power and implementing legislation that would address societal injustice and inequality. Yet, for the man who replaced Tony Blair in the final years of the New Labour government and went on to lose the 2010 general election, the greatest problem was only belatedly recognising that personal connection, charisma and inspiration are just as crucial as ideas and their implementation for a leader in the modern political age.

Brown’s openness about his approach to politics and leadership in a ‘media-conscious age’ leaves you with a tangible sense of his own regret as well as his understanding of the extent to which the political world has changed. He sees, like many of the successful leaders of the Labour party before him, that leadership is a “tension between idealism and pragmatism” for those who seek to achieve the radical changes needed to offer equality of opportunity and security to everyone in our society.

For a politician renowned for his privacy, you come away from this book with a much deeper insight into the things that motivate and haunt Gordon Brown as the man, the politician, the chancellor and the prime minister. From the influences of his upbringing in Kirkcaldy, Fife, to his role in the New Labour government: introducing tax credits that would radically cut child and pensioner poverty; steering through the biggest single tax rise that would pour millions into the NHS; achieving global debt relief for the poor and the handling of the global financial crisis of 2008. The book provides a clear reminder of what a Labour party in power can achieve, as well as a sobering reflection on the need to be effective in our messaging, clear in our strategy and firm in our resolve for change if we are to win over the country and truly tackle the inequalities in our society.

My Life, Our Times by Gordon Brown, The Bodley Head, £25

Ria Bernard is chair of the Young Fabians.