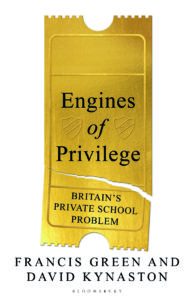 Engines of Privilege – Britain’s Private School Problem is an important and challenging book – challenging because it addresses a question that politicians have sought to avoid asking, let alone answering, since 1945. Francis Green and David Kynaston are to be congratulated for writing an authoritative account of the impact of independent schooling on British society, but more significantly, for proposing practical solutions to the problem.

The authors explain why successive ministers have failed to get to grips with private schools. Labour ministers’ ambivalence was, according to one senior civil servant, because they could not decide whether ‘these schools are so bloody they ought to be abolished or so marvellous they ought to be available to everyone’. Tony Blair is characteristic of the latter perspective, Roy Hattersley the former, and Tony Crosland couldn’t decide. The politician who jumps off the page is Churchill, who wanted public schools to use their endowments to benefit poor pupils.

Private school alumni dominate British society, with terrible consequences for social cohesion: more pupils from Westminster School have gone to Oxbridge than pupils qualifying for free school meals from everywhere in Britain; privately educated men earn 7 per cent more than their state-educated counterparts with the same qualifications. Green and Kynaston make a compelling case for reform.

But their book will anger many on the left because they do not advocate abolition. They accept that well-off parents have the right to spend their money on their children’s education rather than expensive holidays; that private schools provide an excellent education; and that many parents will object to paying higher fees to subsidise bursaries. They are sceptical about whether removing charitable status or tightening up the definition of ‘public benefit’ would make a significant difference.

Instead, the authors propose reforms. Business rates relief could be withdrawn, but the impact would be marginal. Another option would be Labour’s 2017 manifesto proposal to charge VAT on school fees which could raise £2.5bn. An open access scheme would involve ‘needs-blind admissions’ whereby places would be allocated fol-lowing an entrance exam. Families would be means-tested and would pay full, partial or no fees. According to the Sutton Trust, more than 90 day schools would participate, so the impact could be significant. The Fair Access Scheme would require private schools to accept a minimum of 25 per cent of pupils chosen by the state: pupils would be funded at the same rate as in the state system, with the schools making up the difference from their bursary funds. Kynaston and Green think this scheme would be more politically acceptable but acknowledge that independent schools would resist involvement in admissions. Education union NAHT proposed that 10 per cent of places should be allocated to pupils from disadvantaged back-grounds with places funded from pupil premium money and bursaries.

All these reforms are better than the status quo. How-ever, what is required to deliver reform – as opposed to simply talking about it – is an overarching public purpose. Ministers will need to articulate a vision of greater opportunity for low-income families, and how the reform of private school admissions will contribute to achieving that vision. Achieving social change is more motivating for protagonists than simply being on the receiving end of criticism, however strongly argued.

Where I disagree with the authors is their view that the private school problem is a separate issue from addressing the inequalities in state education.

A future Labour government should ensure pupils from disadvantaged backgrounds receive the best education. That must include opening up access to top-performing grammar and comprehensive schools as well as fee-paying schools. Every independent school would participate in an access scheme; grammar schools would be required to admit ‘pupil premium’ pupils who passed the 11-plus; and comprehensives would give priority to pupils from disadvantaged backgrounds ahead of those who live nearest. Such policies would be transformative. The children of account-ants and teachers already receive an excellent education, whether in the private or state sector: the real prize is increasing access for disadvantaged children to the best schools. Green and Kynaston’s book opens up a debate on how the reform of independent schools could contribute to this major policy priority.

Sally Prentice is a former member of the Fabian Society executive committee.