With the collapse of the Tsarist regime in 1917, a number of the provinces on the border of the Russian empire began to break away. One of these was Georgia, which had been an independent country until the end of the eighteenth century when it came under Russian protection and eventual rule. With the Bolshevik seizure of power in November 1917, the local rulers in Georgia – who were democratic socialists and quite suspicious of Lenin’s dictatorship – moved toward full independence, first in a federation with the neighbouring states Armenia and Azerbaijan, and then on their own.

The Georgians had accomplished much in their few years of independence. They had held free and fair elections in which a number of political parties competed – and in which women voted. Their constituent assembly was in the midst of drafting what would turn out to be one of the most progressive constitutions in the world. They had carried out an extraordinary agrarian reform, putting land into the hands of the peasants and preventing the conflict between city and countryside that caused such suffering in Bolshevik Russia. Independent trade unions thrived, and secured a constitutionally-guaranteed right to strike at a time when in Russia, the Bolsheviks were tightening their grip on all of civil society. The Georgian cooperative movement, inspired by the writings of Robert Owen among others, was booming.

For the social democratic leaders of the country, it seemed like a good time to show off Georgia’s accomplishments to sympathetic leaders. They turned to the Second International.

The Second International, founded in 1889, had united social democratic and labour parties from around the world. It collapsed during the world war as most of its most important member parties took the sides of their own countries. Once the war had ended, it was formally revived at a congress in Geneva in 1920. There was a Georgian delegation to that congress including Irakli Tseretelli, a former minister in the Russian provisional government and a leader of the Petrograd Soviet. Tseretelli was one of the Georgians who were already quite well-known among European socialists from their pre-war congresses. He invited representatives of the relaunched international to come to visit his country. 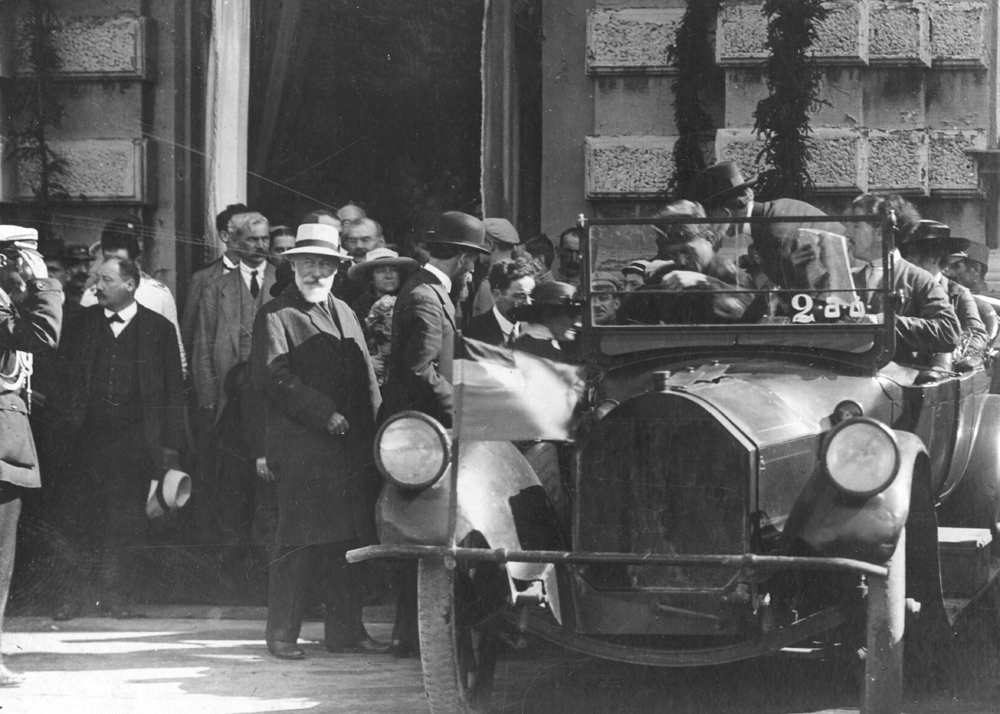 At the end of August 1920, members of the delegation, met up in Paris and set out on a journey of over 6,000 km to Georgia. They were joined by some of the best-known socialists of post-war Europe, among them three from Britain.

James Ramsay MacDonald was a leader of the British Labour party, though he was no longer an MP, having lost his parliamentary seat in the 1918 elections. He had been a member of the executive committee of the Fabian Society for several years.

Tom Shaw was a Labour MP from Preston. He had served as the party’s junior whip. Shaw was also an experienced figure in the international socialist and trade union movements.

Ethel Snowden was the only woman on the trip in her own right. Like MacDonald and Shaw, she was a leader of the Labour party and served on its National Executive Committee, as well as on the Fabian Society executive committee several years earlier. Early in 1920, she joined a joint Labour party – Trades Union Congress delegation to Russia. She published a book that was highly critical of Lenin’s regime.

The French members of the delegation to Georgia included Pierre Renaudel, Adrien Marquet and Alfred Inghels. The Belgian delegation consisted of Emile Vandervelde and his wife Lalla, Louis de Brouckère and Camille Huysmans, accompanied by his wife Marthe and daughter Sara, who acted as secretary to the delegation.

While the socialist leaders were crossing the Black Sea, the Georgians were preparing an unforgettable welcome for them.

“They were welcomed by a large delegation, sailing towards them, with flags attached to the boat,” Sara Huysmans recalled. “People were waving banners on shore, thousands of people, children with flowers, playing music, under triumphal arches.”

Ethel Snowden recalled what it was like for her to visit Bolshevik Russia. “In Georgia it was different. The experience in Batoum was the same everywhere. There was no compulsion to meet us. The people came because they wanted to come… They ran by the side of our carriages, flinging red roses into them and blowing kisses to us as we gathered up the roses and pinned them to our coats as the red emblem of international solidarity.”

They stayed only one day in the port city and then travelled to the Georgian capital, Tiflis.

“It seemed very odd,” wrote MacDonald. “There we were, having left for some days all that seemed to be of the West, having gone through the bazaar and the mosques of Constantinople and proceeded far beyond towards the rising sun, and, at our journey’s end at last, we were being received by a president of the Republic of Georgia in a waiting room at the Tiflis railway station, covered with the most glorious Oriental rugs, but hung with the portraits of Karl Marx and his best known disciples.”

Snowden wrote that the delegation’s “first business in Tiflis was to attend the special session of parliament called in our honour, to hear a speech of welcome from each of the eight political parties represented in that parliament.” 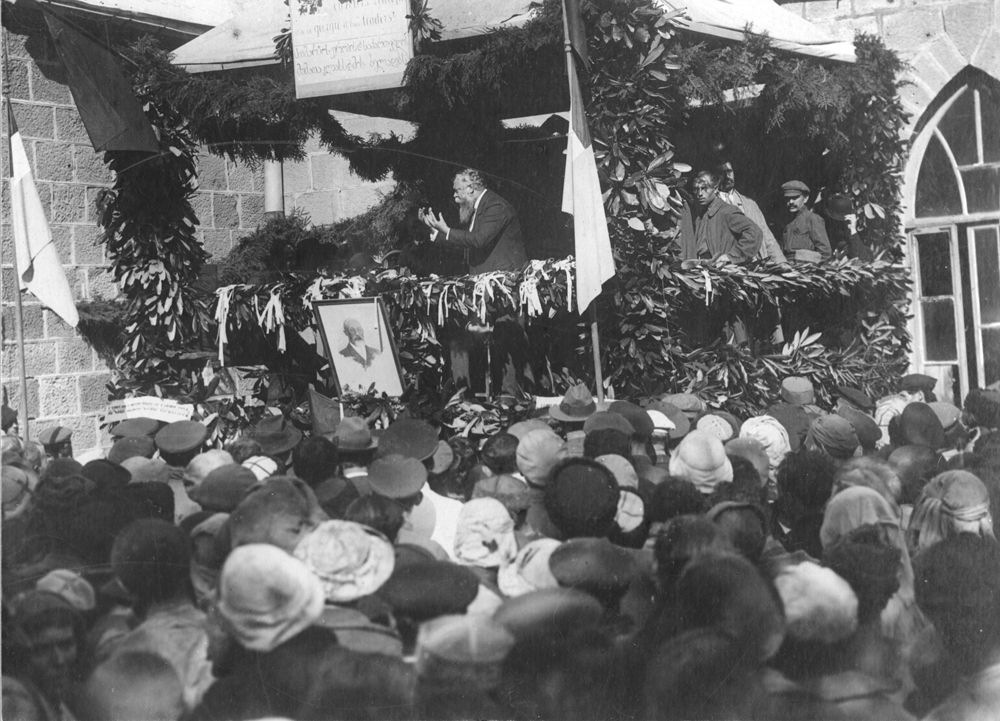 Over the next few days, they were taken around the country. MacDonald described visiting “the heart of the Caucasian mountains, surrounded by the wildest and the gayest rout of untamed mountaineers armed with sword, shield, and rifle” and than standing reverently “whilst an old priest by the light of altar candles guttering in the wind read to us an address of welcome which ended with ‘Long live the International.’”

“In every one of the numerous villages which I visited,” he wrote, “and from the still greater number of peasant deputations that came offering us wine and bread and salt, I heard of nothing but satisfaction, nothing but hope.”

A number of the visiting socialists commented on the way in which the local nobility had acquiesced in the social democratic reforms. “I met princes who gloried in their new-found civic equality,” recalled Ramsay MacDonald. Ethel Snowden “met landlords who submitted cheerfully to the new system and noble ladies who rejoiced in their new-found economic liberties.” They found none of the bitter class warfare that had torn Russia apart in the years following the Bolshevik coup in 1917.

Ethel Snowden was interviewed by The Times on her return to London. “Georgia,” she said, “has had experiences of warfare with Turks, Armenians and Bolsheviks. Prices are still very high, and the exchange is heavily against her. But the people are full of hope and determination. They have set up what is the most perfect socialism in Europe.”

Ramsay MacDonald too was interviewed by the Manchester Guardian upon his return. As the newspaper summarised the interview, the Labour leader described “a happy country under a socialistic regime.” MacDonald told the journalist that he was “delighted with his visit to Georgia. It is, he said, a beautiful country and small as it is – its population is about four millions – he believes it to have a great future.”

The newspaper reported MacDonald’s description of the rest of the Georgian economy:

“The largest coal mine… is run by the state, but the important manganese mines are still in private hands. All the forests belong to the state. Most of the few factories are still in private hands, but schemes for socialising the mining and other industries are under consideration. Much is being done to promote co-operative production… The country is prosperous on the whole, and there is plenty to eat. Of course… the socialist regime is only beginning and it will take a long time to develop it.”

Unfortunately, the Georgian socialists were never given the time to carry out their experiment until the end. In February 1921, just a few months after the delegation left, the Red Army, under the orders of Stalin and his cronies and without the knowledge of Lenin or Trotsky, invaded the country. After a few weeks of bloody fighting, the Russian forces were victorious, and the remnants of the social democratic government fled the country. Georgia had lost its independence and it was absorbed into the Soviet Union.

With the collapse of the USSR in 1991, Georgia proclaimed its independence based on the constitution of the earlier Georgian Democratic Republic, declared 26 May (the date of the proclamation of independence in 1918) as the national holiday, and adopted the blood-red flag of the social democrats. Later these were replaced by more traditional Georgian symbols, and the country’s leadership eventually embraced neo-liberal policies.

The story of the first Georgian republic which lasted less than three years was largely forgotten, having been suppressed during the long years of Soviet rule. Nevertheless in recent years a new generation of young activists and an increasingly militant trade union movement have shown a growing interest in what happened in their country a century ago – a country that so impressed MacDonald, Snowden and the others during their visit in 1920.

Eric Lee is a journalist and historian who has spent over thirty years researching independent Georgia. He is founding editor of LabourStart.