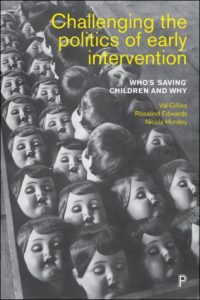 Parents have long been blamed for their children’s misfortunes and underachievement, but is it really their fault? In their new book Challenging the Politics of Early Intervention, Val Gillies, Rosalind Edwards and Nicola Horsley, seek to question assertions that the ‘wrong type of parenting’ has biological and cultural effects, instead showing how early intervention policies underpinned by interpretations of brain science in fact perpetuate inequalities of gender, class and race.

Concerns about parental behaviour are nothing new and poor parenting has long been blamed for the ills of society. While the precise form and content of such arguments may have changed over time, what remained constant was the belief that family relationships could be in some way changed for the better in order to alleviate social and structural problems. Today, the view that the first years of a child’s life (and this even extends before birth to life in the womb) are the most important for development is widely accepted and has come to determine policy and service provision both within the UK and internationally.

Gillies, Edwards and Horsley particularly focus on the use and abuse of developmental neuroscience as an explanatory model for the importance of early years parenting. It is now widely accepted that poor parenting irreparably damages the brains of babies and young children and early intervention with parents is the solution to prevent this. The quality of mother-child relationships is viewed as being decisive in building children’s brains, and as such underlies many early years intervention programmes and the practices of early years professionals.

They give the example of the Family Nurse Partnership (FNP) programme, an early years intervention initiative in the UK (based on a similar programme in the US) that targets young and marginalised first-time mothers. The programme is offered to first-time young mothers early in pregnancy, with weekly or fortnightly visits continuing over the course of the child’s first two years. The authors show how FNP practitioners draw on accounts of babies’ fragile developing brains. For example, providing mothers with a sheet headed ‘How to build your baby’s brain’ featuring a list of activities claimed to enrich neural connectivity, such as reading books, singing rhymes and playing on the floor. While the achievements of FNP are questionable, the FNP project continues to be promoted. Within austerity Britain, the paucity of the evidence base has proved less influential than the project’s affordability, and it has been touted as a cost-effective alternative to a universal health visiting service.

The beliefs that the poor cause their own poverty by poor parenting, that mothers can protect their children against adverse circumstances, and that early years intervention to promote brain development can assist this, has also been taken up at the international level. In the book, Gillies, Edwards and Horsley show the popularity of the view that better parenting, and particularly better mothering, will not only improve children’s outcomes but society too. For example they give the example of a 2014 UNICEF Connect blog on ‘how neuroscience is redefining early childhood development’ which states that ‘caring, stimulation and good parenting’ will help ‘children faced with multiple adversities of violence, disaster, and poverty’. Despite the overall paucity of evidence, initiatives are being rolled out across the developing world, in the belief that improved mothering will surely benefit the state of the nation.

This book argues, however, that there is little evidence to suggest that better mothers will lead to better outcomes for children, or that intervening to encourage mothers to improve the care they provide their children works. Longitudinal evaluations of interventions have disappointing results and cohort studies have shown how income levels and maternal education have a greater impact on children’s outcomes (such as educational attainment and wellbeing) than any particular parenting styles. Moreover, Gillies, Edwards and Horsley show how such a perspective  leaves mothers accountable for poverty and other social ills and lets everyone else off the hook. They argue that the policy and practice preoccupation with how poor mothers and deprived families bring up and nurture their children assumes that the causes of hardship and discrimination lie in how much attention, and of what sort, mothers give to their children rather than in systematically and structurally ingrained local, national and global inequalities. They conclude that: “While futile and damaging early intervention programmes are being pursued, austerity bites ever deeper for poor families, underscoring the urgent need for political and policy reform.” And they hope that by contesting manufactured truths about biological cycles of deprivation” their book will help “fracture a dangerous consensus”, which it very successfully does.

Challenging the Politics of Early Intervention: Who’s Saving Children and Why by Val Gillies, Rosalind Edwards and Nicola Horsley, is published by Policy Press, £22.99.

Angela Davis is a historian at the University of Warwick whose research focuses on childhood and parenthood in Britain and Israel.